Infrastructure Minister Chris Hazzard has visited ongoing and completed infrastructure projects and flood defence measures in the Downpatrick area of South Down.

The Minister began his day with a visit to Kilmore to see the progress being made at the £500,000 bridge replacement works at Rocks Chapel Road.

“Delivering tangible improvements to local areas forms a key part of my plans to improve the north’s transport network.

“The improvements at Kilmore are nearing completion and I expect that the bridge will be open to traffic before the end of August. The investment will deliver long term benefits and serve the local community and visitors to the area for decades to come.”

The Minister also visited the nearby A7 Belfast Road to see the results of a £160,000 investment. Around 1.2 kilometres of resurfacing of the arterial trunk road between Annacloy Road and Crossgar was recently completed and the road has fully reopened. 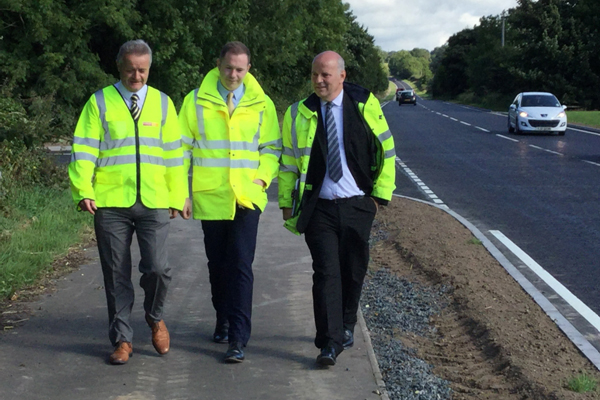 The programme continued with at visit to the Quoile tidal barrier at Killyleagh and flood defence in Downpatrick where the Minister met Rivers Agency staff. The tidal barrier and associated structures play a vital role in reducing the flood risk to low lying areas of the town.

“The tidal barrier at Killyleagh and associated structures play an important element of our floods defence infrastructure. They played a vitally important role in helping preventing serious flooding to the Church Street area of Downpatrick at the beginning of the year.  Sluices in the town were closed and round the clock pumping operations took place to prevent flood damage to property.”